Warning: Cannot modify header information - headers already sent by (output started at /home/thetim15/public_html/wp-content/plugins/sell-media/inc/class-cart.php:30) in /home/thetim15/public_html/wp-content/plugins/wp-super-cache/wp-cache-phase2.php on line 62
 The Machu Picchu Post: Our Visit and Tips to Improve Your Visit | The Time to Go Is Now 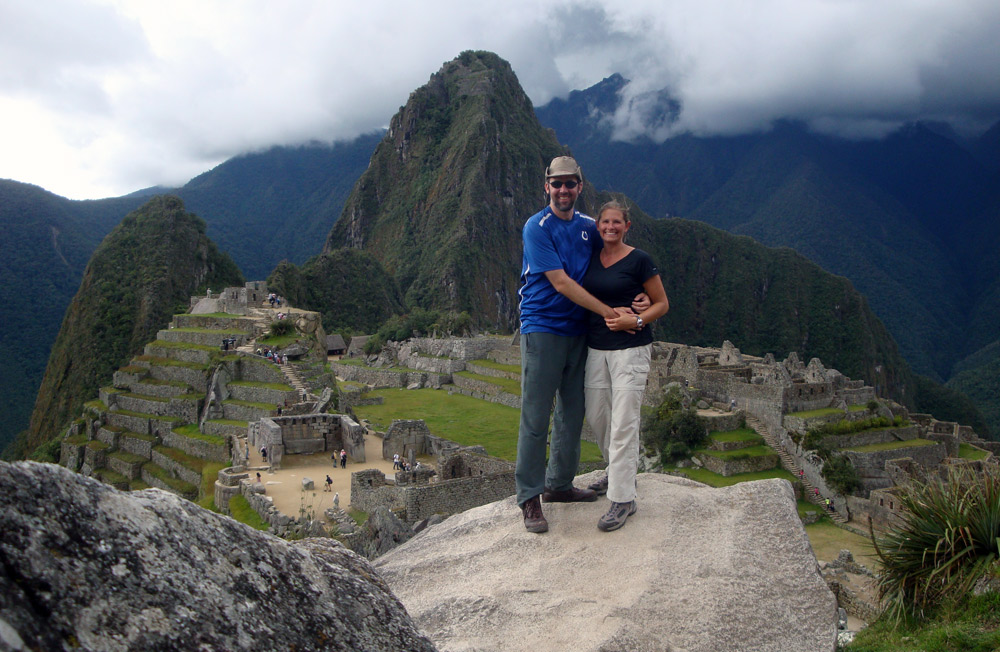 If you search for information about visiting Machu Picchu you’re bound to come across a piece written by someone who was fascinated by photos of it as a kid and had wanted to visit ever since. There are a lot of them out there and I’m not any different. Mrs. Harold’s 7th grade Social Studies class is my earliest concrete memory. As a kid I didn’t understand why the Aztecs & Mayans would want to start a civilization in the middle of the jungle when they could have had mountain top fortresses. I’ve since learned that things are a little bit more complicated than that. Still, the Incas have remained a fascination to me and making the trip to Peru has been on the list for a while. Our time in the Sacred Valley was a good introduction but Machu Picchu was the ultimate goal.

There are always rumors circulating that Peru will eventually clamp down on tourism to Machu Picchu in order to help preserve the site. They currently limit the number of visitors to 2,500 per day which considering the size of the site seems like a small number until you calculate the math over a year: If they sold out every day that would be almost one million visitors a year. Its peak attendance to this point was close to 400,000 in 2000. We visited in February which is during the rainy season and the only time of the year the Inca Trail is closed for maintenance. That helped cut down on the crowd. I don’t think there were over 2,000 people there the day we visited and while there are a lot of places to wander and ways to find spots with no one else around it did seem like a lot of people.

Peru will never eliminate tourism to Machu Picchu because it is a steady stream of income. If anything they will tighten up the visitation restrictions. If that happens, the prices will go even higher. Currently a ticket to visit Machu Picchu and to climb Huayna Picchu costs S/.150 per person (almost US$55). I’ve read that there are many other sites around Peru that either rival or surpass the spectacle of Machu Picchu and I would like to visit them someday. As it stands now though most of those other sites are only accessible via multi-day hikes. We would like to do one of those hikes but we were concerned about our ability to do the four day Inca Trail hike on this trip. After spending a week at altitude and taking some smaller hikes we were very relieved that we hadn’t tried the trail. Maybe after a year or so of regular hiking we’ll be in a better position to try something like that in the future.

Before you can tour Machu Picchu you have to get to Machu Picchu and before you can get to Machu Picchu you have to get to Aguas Calientes. In the peak season trains run all the way from Cusco but the longer journey is more expensive and, well, longer. In the off season you have to catch the train in Ollantaytambo. You can get on the train there in peak season as well. It is a shorter ride and is cheaper. From a cost per mileage aspect it is one of the most expensive train rides you’re ever going to take. Prices vary depending on the quality of the train and the desired times. More popular times cost more. (Our were $US50-55 each way per person.) It is also one of the more scenic train rides you’ll ever take. The train line follows the Urubamba River through the valley which in the rainy season is a churning mass of rapids.

Aguas Calientes is a tourist town in every possible sense. It is a collection of hotels, hostels, restaurants, bodegas and souvenir shops wedged into the valley just around the river bend from Machu Picchu and serves as the de facto base camp for visitors. To get from the train station to any other part of town you have to walk through the souvenir market. Accommodations can be hit and miss but thankfully Lyle (from GringoWasi – our B&B in Huarocondo) had a recommendation for a place to stay and booked it for us. 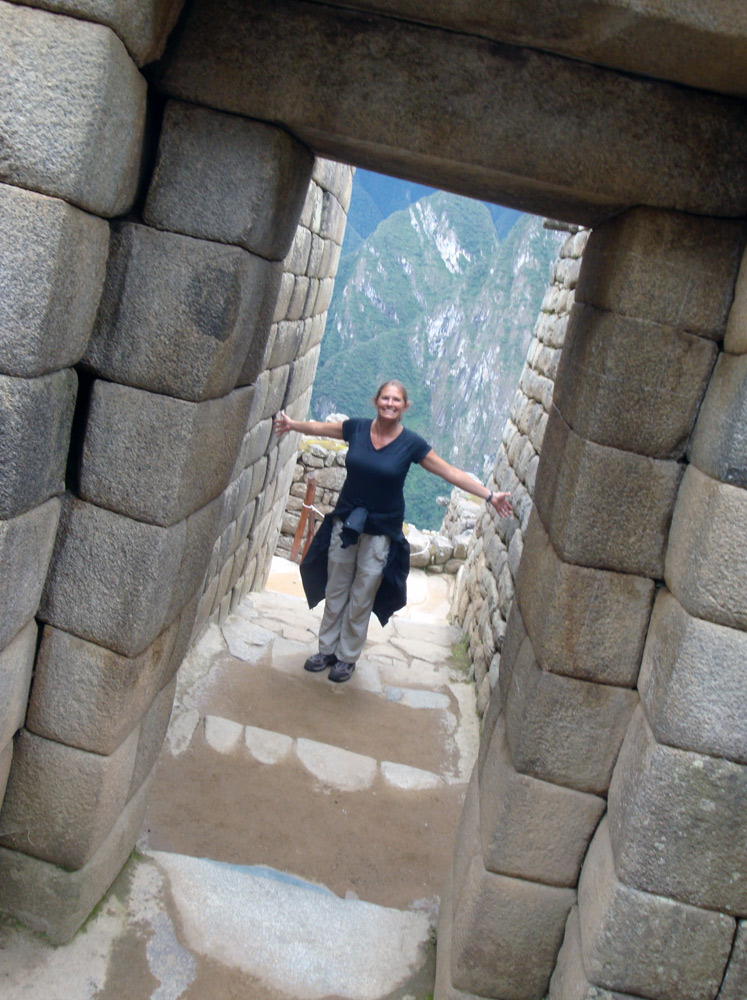 Rain poured down most of the night but thankfully cleared up before morning and never showed itself again until we headed to the train station to leave later that evening. The bus ride from the valley to the top takes you through several switchbacks. If you sit on the right side of the bus you’ll be able to catch glimpses of Machu Picchu as you make your way up. The first sight of it did send a bit of a tingle down the spine. The first thing that struck me was the scale. Not of Machu Picchu itself as much as the setting and that anyone would ever think to build something in such a location. Who am I to question it though? The Spanish never found it so it was obviously a good spot.

We bypassed the tour lines because we are on a budget and we were perfectly content to wander around and explore on our own. Our preferred way of touring Machu Picchu was to walk around for a while and then find a relatively quiet vantage point to sit down and take it all in for fifteen minutes before moving on and repeating the process.

A portion of our day was spent climbing Huayna Picchu. Huayna Picchu, the triangular peak that appears in the background of most Machu Picchu photos, is bigger than it looks. Distance provides the illusion that it is just a small point sitting at the back of Machu Picchu. I never knew there were ruins at the top of it until we arrived that morning. If you aren’t adjusted to the altitude it can be rough. We had been at altitude for a week and while that bothered us a bit it was more our legs that were giving us trouble. Nothing ridiculous mind you, but it does take some effort and we had to pause several times.

We have a running joke that it seems like every time we go on vacation we pay good money to climb a bunch of stairs whether it is to the top of a tower, a cathedral or a temple. In this case, it was worth it. Being able to look down on Machu Picchu and see it from a different perspective was worth the cost and the effort.  We stayed at the top until the guards kicked us out. They start clearing the trails in the early afternoon.  The trip back down was as exhausting as the trip up. Going up strains the muscles. Coming down strains the knees. We continued our exploration of Machu Picchu until we were completely out of gas.

So, was visiting the supposed best Incan site worth the time, trouble and expense? Yes. Yes it was.  Sure, it put a definite ding in our budget but we won’t have to worry about going on our next trip to Peru. Seriously, to be able to see it in person will be one of the top highlights of the trip regardless of what we encounter in the coming months. There were times where we felt like we were hemorrhaging cash but in the end we were able to make it work.

Tips for Traveling to Machu Picchu:

There didn’t seem to be much difference between the Vista Dome and the standard train. The Vista Dome had a bit more window surface area and a bit nicer environment, but the standard had more leg room for me. If you can save money by taking the standard do it.

If you want to climb Huayna Picchu book your ticket well in advance. They only allow 400 visitors to climb it each day and they sell out fast even in the off season.

If you’re only going to spend one night in Aguas Calientes, do it AFTER you hike. Machu Picchu will wear you out. The last thing you will want to do is worry about catching a train. Besides, you can’t see anything at night anyway. If you’re paying that much money for a train ticket you might as well enjoy the damn view. Spend the night after hiking. Grab a snack and a shower and leave in the morning. Plus, if you stay late in the day the crowd really starts to thin out which is nice. Since we’re not early risers we preferred this tactic as opposed to trying to get on the first bus at 6am. 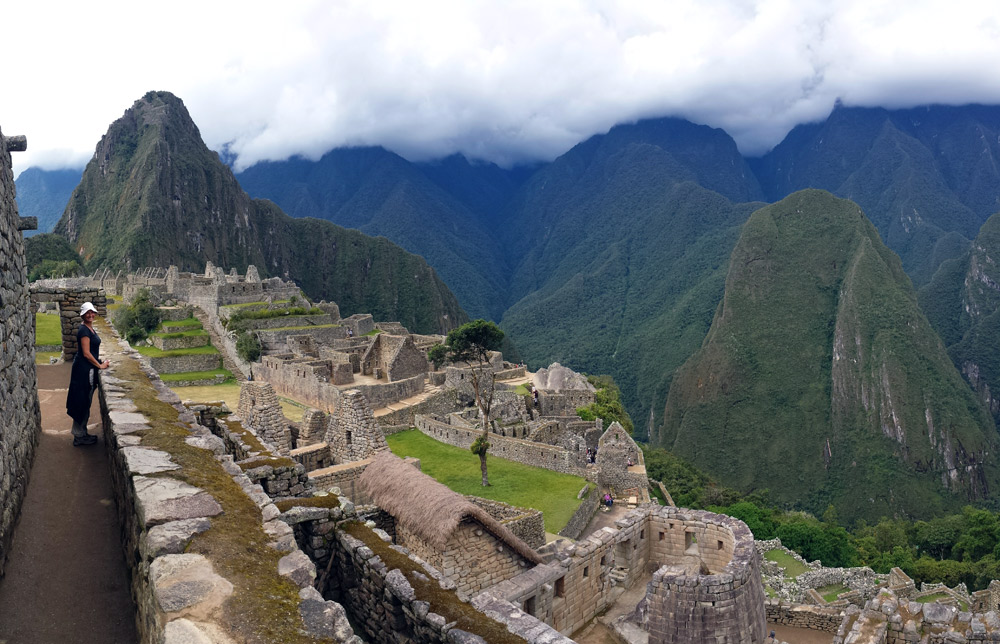 If you do arrive the evening before you are going to tour Machu Picchu, go get your bus tickets that evening. It will be one less line you’ll have to wait in the following day.

Bring water. Bring as much as you can. Yes, you can buy some there if you run out, but having plenty with you will make your day much more enjoyable. It can be a long walk back to the front of the park. Put sunscreen on that list, too.

If you don’t like tours, then don’t go on one. Download a guide and read up on it before you leave or take it with you if you have the right device. It is more fun to explore and poke around on your own. Besides, you’ll cross paths with enough groups over the course of the day that you’ll pick up bits and pieces as you go anyway. Skipping the tour also allows you to bypass the logjam of visitors milling around the entrance.

Lyle from GringoWasi told us that as soon as we entered (after passing all of the tour groups) to head left up the hill to the watch tower and get our pictures in before all of the tour groups occupied the high ground. Sound advice. We were able to get our obligatory Machu Picchu pics from that vantage point. It was packed the rest of the day until the last hour. This also allows you to get to the Inca Bridge and back before it gets too crowded as well.

Take your lunch. You aren’t supposed to bring food in but they don’t check backpacks. Just don’t eat in line of sight of any Machu Picchu staff. We chose to picnic towards the top of Huayna Picchu. You’ll want to sit down and take a break after climbing it and there are only one or two guards on top of the hill so it is easy to find a spot. Just take all of your trash out with you. There’s enough liter in Peru, you don’t need to add to it.

← Photo of the Day: What Do You Do When You Climb to the Top of Huayna Picchu?
The ABC’s of Peruvian Food: Alpaca, Beef Hearts and Cuy →

10 Responses to The Machu Picchu Post: Our Visit and Tips to Improve Your Visit