Warning: Cannot modify header information - headers already sent by (output started at /home/thetim15/public_html/wp-content/plugins/sell-media/inc/class-cart.php:30) in /home/thetim15/public_html/wp-content/plugins/wp-super-cache/wp-cache-phase2.php on line 62
 9 Wonderful Ways to Spend Your Day in Prague | The Time to Go Is Now 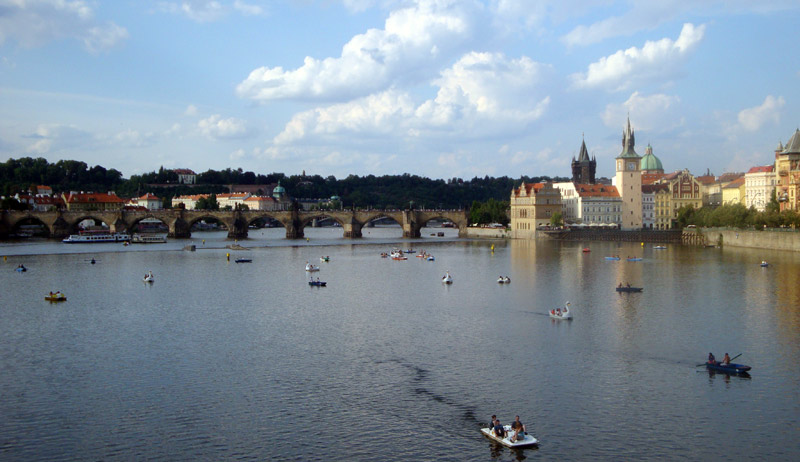 Prague, the capital of the Czech Republic, turned out to be one of my favorite cities of our entire trip. It is a gorgeous city with a variety of tasty food, great beer and lots of interesting things to see and do. The biggest plus is it’s affordable. In general I haven’t been a big fan of major cities on this trip because they tend to be expensive. You end up eating at your apartment all the time in order to be able to afford the city attractions. That is not the case in Prague.

We were a little concerned Prague would be very crowded in mid-July. The main part of town (Prague 1 Municipal District) was always filled with people, but you didn’t have to go that far to get away from the crowds. We did our best to avoid main attractions during peak hours, but sometimes you just couldn’t avoid it.

Prague Castle is the most visited site in the city. It is one of the largest castles in the world and consists of several buildings within the walls. You can visit everything if you buy a long tour ticket or you can opt for the short tour ticket and only see the highlights like we did. Once you activate your short tour ticket you have 2 days at your leisure to visit the Old Royal Palace, St. George Basilica, St. Vitus Cathedral, a model castle city street called Golden Lane and Daliborka Tower which houses military weapons and torture devices. The castle gardens can be visited for free.

Charles Bridge, another very popular attraction, is the main pedestrian bridge into the old town. It is lined with several statues of saints and memorials each with their own story. St. John of Nepomuk was tortured and thrown into the Vltava River from the Charles Bridge on the kings’ orders in 1363. The base of his statue has a relief that shows the event. You can see brightly polished, worn down spots on the statues that are rubbed for good luck. Street vendors and small musical groups set up here during the day. While it can be entertaining, it can also get very crowded .The best times to explore the bridge are late at night or very early in the morning.

The Old Town Square is a great place to people watch while admiring the variety of architecture. The square fills with numerous people on the hour to watch the puppet like display of moving pieces on the Astronomical Clock. The clock’s main purpose is to measure the phases of the moon and the equinoxes. Once the show is over, the crowd disperses throughout the square.

Wenceslas Square is more of a boulevard than a square. This area was originally a horse market, but now houses shops, restaurants, street performances, museums and several sausage stands. We were able to enjoy a sausage sandwich while watching local performing dancers. While the sausage made for a quick and easy meal, we both preferred the ones in Germany more.

Paddle Boat on the Vltava

We took a paddle boat ride along the Vltava River at night. Many people do this during the day, but at night you can enjoy the tranquil sounds of the water while being mesmerized by the captivating lights of the castle above you. There are not nearly as many other boats at night, so it makes for a nice relaxing evening. We stopped at the quickie mart and grabbed a few beers to take along for the ride.

Right on the Old Town Square is an exhibition of works by Salvador Dalí, Alphonse Mucha and Andy Warhol. Even though this was in the heart of the old town it wasn’t jammed packed. The exhibition while we were there contained works by Dali, Warhol and, Mucha, an artist most known for his illustrations on posters, postage stamps and postcards around Europe. The exhibit was three levels and each one was dedicated to a different artist. The views from the windows on the square were great for taking pictures.

Anthony Bourdain has always made us want to travel. We both really enjoy watching his shows. One of the places he went in Prague was the Sapa Market. This is a Vietnamese market and trading area that we just had to explore. Most of the places we went to in Prague the proprietors spoke English pretty well, but that was not the case in this area. We wandered around an industrial area for a bit until we came upon the food stalls. Blindly following our nose and some pictures on the stall doors we sat down for pho. Our intentions were to order a beef noodle soup. Keep in mind not every pictures is actually what you think it is because we ended up with fish. While I would probably have never ordered this, it was unique, delicious and amazingly crispy for fried fish sitting in a broth noodle soup. Unfortunately, Sapa market is a bit far from town or we would have went back to try more of the delicious food. If you want to go, take the Red Metro line to Kačerov and then hop on the 113 bus.

The Banks of the Vltava

You don’t have to hang out in a bar to be social in Prague. Public drinking is everywhere including your tram ride home. The people in the know go down to the river. It doesn’t cost you anything to get in the area and you can bring your own from several of the late night convenient stores. Most people just plop down on the sea wall and claim their area. If you want something a little fancier there are several boats, barges or pop-up bars selling alcohol and snacks along the river, too. The area along the river is long and varies from many people to more quiet areas, so just decide what best fits your mood. Either way it makes for an entertaining evening.

The Parks of Prague

Parks are scattered throughout the city of Prague and can be a nice break from the city. Some such as Kampa Park are right in the main part of the city and others are just a tram ride away. You can use your transport pass for the funicular up to Petřĺn Park where you will find beautiful gardens and their own version of a mini Eiffel Tower. Many of the parks have great beer gardens including Stromovka near their fair grounds/amusement park area. A huge fountain is here that has regularly scheduled water shows in the summer. For a small price we viewed dancing water lights to Michael Jackson songs. It really is pretty incredible and each show is different throughout the night. Exploring the parks is a great way to relax and get away from some of the crowds.

Prague has been one of our favorite cities of the trip and because it was affordable we were able to do a lot. The crowds are manageable during the peak season, but we hope our next visit will be in the fall.

← 7 Groovy Places to Visit in Montenegro
Extending Your 30 Day On Arrival Tourist Visa in Bangkok, Thailand →