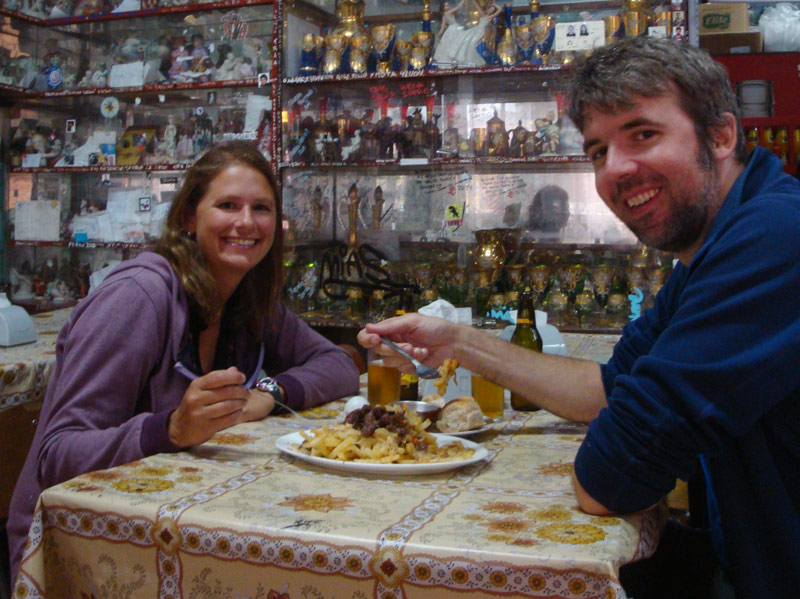 In Peru we ate a lot of strange foods and had a fair amount of stomach aches getting used to new cuisine. Chile seemed to be a transitional country. The food wasn’t as foreign to us. We found a lot more foods we enjoyed even if they weren’t so healthy. For example most sandwiches come “complete” with mayo and smashed avocado. Consider a normal portion of mayo on most sandwiches in the United States, triple it and then you will be close to the amount of mayo on Chilean sandwiches. Here are some of our tasty treats of Chile:

Arica is a desert beach town in northern Chile. We stayed in a great hostel directly across from the beach and very close to the central market. My favorite dish in this town was the Chupe de Camarones. I tried to find this dish multiple times in Arequipa, Peru but only saw it at high end restaurants. From everything I read it was supposed to be similar to shrimp bisque, but it was more like a bowl of shrimp dip. The bowl was full of oozing melted cheese mixed with bread and big chunks of shrimp. There might have been a little broth in there. My biggest concern was ending up with a stomach ache because it was so rich, but it was full of shrimp and delicious so I didn’t care.

We had empanadas several places in Chile. They are always good for a quick snack and are sold just about everywhere including gas stations, grocery stores, bodegas and restaurants. In Chile, the empanadas are bigger than the ones we’ve found in Peru or Argentina and there are many more options for fillings. You tend to get a better variety of ingredients when you order them in a restaurant. In Arica we ate the best shrimp and cheese empanadas from a seaside shack. In Vicuña we went to Paraiso del Elqui for lunch to split a couple of the 306 varieties of empanadas. Our favorite was the lamb, mint, cheese and onion. The most popular version of empanada sold all over Chile is known as Pino. Pino is ground beef, spices, onion and an olive. This is a staple food item for most South Americans who want something to tide them over until their late night dinner.

We tried fried fish a few different times in several of the seaside places. Every time we smelled fried seafood we craved Po’boy’s from New Orleans. Most of the fried fish we ate reminded me of a fish fry at my grandparent’s house. We happened to find a great pescado place across the street from Hostel Avenue where we stayed in La Serena that had a top notch fish sandwich. The sandwich at Pescado Frito Kardumen was huge and we both loved every bite of it. The batter was crisp and light. It was fried to perfection with little leftover grease. The home-made tartar sauce had just enough herbs, mayo and lemon to be the perfect complement to a scrumptious sandwich. This will definitely go down in my book as one of the best fried fish sandwiches I have ever had and I have had my fair share of fried fish.

We stopped in a Thai place in La Serena. Our chef/waiter was from Valparaíso and suggested that we go there and visit his favorite establishment J Cruz for chorrillanas. Valparaíso is where this popular dish of fried potatoes, fried onions, fried bacon and cheese originated. J Cruz was supposed to be the best place for it. In general we found most of the fries in Chile were not very crispy. These were some of the best we had. Although, the crispiness faded once all the fried onions, bacon and cheese spread throughout the plate.

After two months of mediocre pizza I finally found a place I really liked in Santiago. Tiramisú had great pizzas, anti-pasta and tiramisu. We liked it so much we went twice. I decided why take a stab at mediocre pizza when this is a place I know it is good. The first time we had a four quarter pizza squared off in sections of salami, mushrooms, artichokes and ham along with a nice antipasto. The second time we had a standard South American pizza of ham and mushrooms. Since we didn’t get the tiramisu the first time, it was necessary the second time around. I really enjoyed everything and if I go back I will have a simple salami pizza and a tiramisu. The salami only was the best because it was crispy, salty and simply balanced out the other ingredients perfectly.

Santiago: The land of sandwiches and hot dogs loaded with mayo and avocados

Hot dogs are a popular food for the Chilean lunch or late night eats. The most popular chain there is called Dominos. Hot dogs in Chile come with a variety of toppings with the most popular having mayo, avocados and tomatoes. We also visited one close to our apartment called Hogs where Mark enjoyed a hot dog with bacon and BBQ sauces while I ate cheese, onion and sauerkraut. Even the small versions are large and take some skills to eat. Apparently we don’t have the skills because it took us twice as long to eat than everyone else in the restaurant.

A traditional lomito completo is another popular lunch sandwich served in Chile. The lomito is sliced, grilled pork topped with mayo, cheese, onion and sauerkraut. I believe it is supposed to have avocado on it too, but for some reason ours did not. One of the best known places to try this sandwich is at Fuente Alemana. This soda and schoop (draft beer) shop is a popular place that turns people over quickly for lunch and late night food.

It was crowded when we first arrived so we waited a few minutes to get a seat at the counter. These are the best seats in the house because you can watch the ladies making sandwiches. I immediately ordered two complete lomito sandwiches and two beers. The nice lady didn’t completely understand me, so we ended up with two beers and only two beers. We waited patiently as everyone else around us continued to get these massive sandwiches. Finally, we understood there was some confusion. We once again ordered two sandwiches and by this point we needed two more beers.

In most restaurants your meal starts off with bread and their own variety of pebre. Pebre is a Chilean salsa made with the local aji pepper. It can be mild, but often times it is relatively spicy. It is typically refreshing to snack on while waiting for your entrée that can sometimes take a bit.

Other places just give you a red bottle filled with an aji pepper sauce, which tends to be confusing because you think it is ketchup. Most people only make this mistake once and then you know it is never ketchup. In Chile, ketchup is often in a green squeeze bottle if it is available at all.

In Santiago the Central Market is primarily a fish market and can be a very tourist place. We tried to avoid some of it by staying to the exterior stalls. Tio Willy’s was the place I decided on for machas parmesana or razor claims with parmesan cheese. I think these were more like surf claims because razor clams should be much longer in length. They were a lot like parmesan oysters and were delicious. I was surprised because I am normally not a big fan of clams. We topped that off with paella and a shrimp empanada.

In Chiloé I was able to try caldillo de congrio which is an eel fish stew. Seafood is all over this area and is supposed to be inexpensive. I had been looking for cheap inexpensive seafood, but most of the places I wanted to go were closed because we were here in the off season. The main thing I was looking for was this stew because the eel fish was very popular to the area and it was supposed to be very good. We stopped at Rucalaf Putemun, a great lunch restaurant outside the town of Castro, because we saw the stew as part of their menu of the day. It was a nice brothy, briny, creamy soup. It had chucks of potato and fish perfect for sopping up with your bread. Next, we were given a pork chop in a wine, peppercorn sauce with cheesy potatoes and we finished it with cheesecake for desert. This was our best meal in Chile and it turned out to be one of the cheapest at about $10 each. We ate here on our last day in Chiloé otherwise we would have gone every single day.

6 Responses to Foods of Chile: Seafood, Sandwiches and Mayo