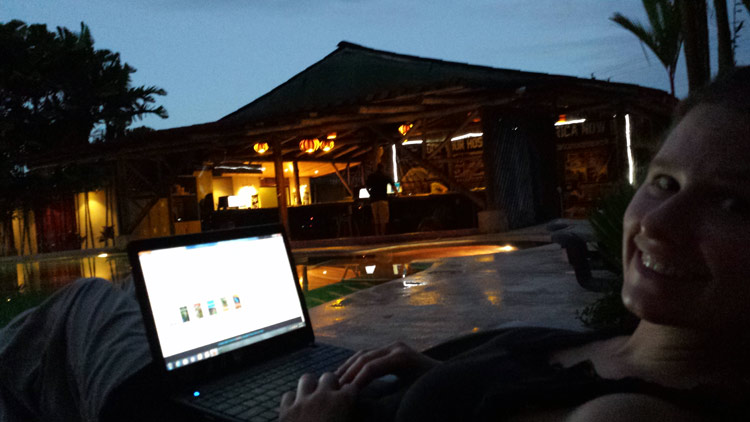 The last two weeks leading up to the trip were rather stressful for me. I was supposed to be done with work on Monday, January 6. That didn’t happen due to a major snow storm in Indianapolis. Our offices were closed that day and I was stuck in Minnesota on Sunday and couldn’t get back.

The airline was not able to get me out for two days because of all the snow in Indianapolis. Knowing how much I had to get done before I left, I decided to drive home from Minnesota. I made it all the way to Chicago with very little snow and then out of nowhere there was a blizzard. The state closed I-65 due to numerous stranded vehicles. I was stuck once again. I finally made it home the next day when a 2 hour drive took 5 hours.  I had to drive the back roads because the main roads were still closed.

Finally by Wednesday, I was able to go into the office and transfer stuff over to co-workers. After Thursday I was finally done and could focus on my own stuff. My friends called me the worst quitter ever. Once I left the office that day I headed to the airport to try and retrieve the luggage that I still hadn’t received from Minnesota. Luckily, I was able to find it this time and I even got on the local television station as they were interviewing several people about their luggage being MIA for days.

This left me with about 12 days to get stuff done. Most which were already filled with goodbye gatherings with friends and family. Not to mention we were continuously getting snow almost every day. I had a receiving line for goodbyes at work, a huge going away skating party courtesy of our close friends, Paul and Kim, and a final send off from friends and family at our house and the airport. Despite all of this, it still didn’t feel like we were going away for over a year.

I spent a lot of my weekend throwing things out that I would no longer need and making a pile of stuff that I would like to take with me. The majority of the weekend was spent taking a written yoga final, memorizing Sanskrit and practicing for a final yoga exam. I took my final yoga test on Tuesday, January 14. I am proud to say that on January 16, I received my certificate and I am officially a yoga instructor.

It was actually a relief when I got on the plane. No matter what didn’t get done it didn’t matter. We were doing this. If there was anything that needed to be done or I didn’t have we would just figure it out along the way. I stayed up until around 4am the night before we left. I repacked my backpack 3 times. I finally had it down to 25lbs and I was content with what I had no matter how much it weighed at that point.

Our first few days in Costa Rica have been interesting. I am trying to adjust my backpack and figure out exactly where is the best place to store which items. I had one mishap with bug spray that spilled everywhere, but luckily it was in a zip lock bag. My stuff may smell a little like bug spray, but I figure there are some benefits to that situation. I told Mark I really want to make it to our condo in Manual Antonio on February 3 before we do laundry. We will see if we can hold out that long.

Besides adjusting to living out of a backpack and community bathrooms/showers, the biggest issue has been realizing I am in a tropical area and this is not a vacation.  It is a life change for a while. You can’t just do everything you want simply because you are on vacation because you are not. You are on a budget to make this your lifestyle for the next year. I feel like I should be sitting by the pool drinking a beer, but instead what I really need to be doing is typing this blog and planning how I am going to be able to do the things I want within our means. It is a definite mind change and something I need to get used to quickly. I keep telling Mark that Costa Rica is my transitional period. I won’t always want to just do everything, but that is probably not true. Every place will be new and exciting, so I will once again need to decide what I can live with and what I can live without.

We have not had many options to cook for ourselves, so that makes things challenging. The other issue is I love food, so I always want to go try some grand place when we should be eating snacks from the store or in what is known as a “soda” here. They are like Costa Rican diners that have a meat choice with beans, rice and some type of salad for around $3-$5. It doesn’t help that I don’t eat beans, but I am going to work on that one. I am at least trying to eat some black beans, but so far the beans are winning.  I am still not a fan.

It is time to stop writing by the hostel pool and get ready for hiking around Volcan Arenal and a trip to Baldi Hot Springs. Yep, I did actually convince Mark it was cheaper and more convenient to take a tour today than to try it on our own. I guess that means we will have Pringles and granola bars for lunch tomorrow.

← And So It Begins: Day One
Photo of the Day: Look What Julie Found →