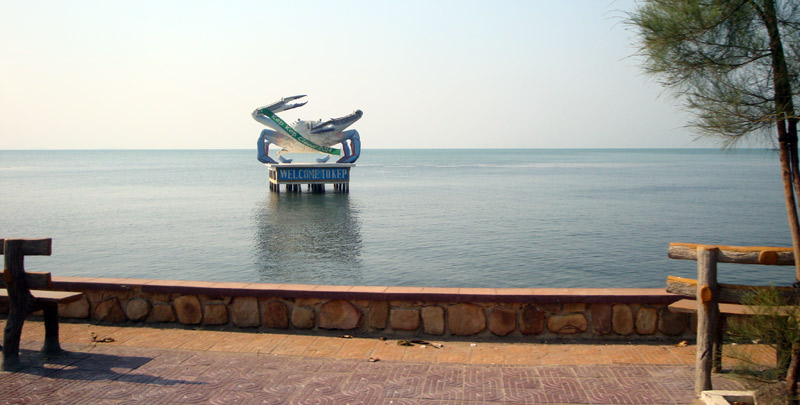 For the first two-thirds of the 20th Century Kep was the premiere seaside resort area in Cambodia. Frequented by wealthy French colonialists and well to do Cambodians, remnants of its former glory are easy to spot. High stone walls with intricate metal gates section off large tracts of land that used to be estates and villas. There’s just one thing missing, the buildings themselves. Years of civil war and the Khmer Rouge were not kind to Kep. Many of the buildings were stripped, destroyed or just left to decay. Over the last few decades Sihanoukville has surpassed Kep as the top beach destination but Kep is making a comeback.

When Julie tells me that a place is the  “most popular” beach area in a particular country I usually have what can best be described as an allergic reaction. Visions of t-shirt shops, tattoo parlors, shitty restaurants with sidewalk shills trying to wrangle you inside, dreadlocked Australians in oversized black tank tops (What is up with Australian backpackers and big tank tops….it’s like a damn uniform.) and crowds of people….lots and lots of people. This is the reaction I had when she mentioned visiting Sihanoukville. Fortunately, she couldn’t find a place to stay that fit our needs and was in our budget. We needed an alternative. “Well, there’s Kep,” she offered.

“There’s a crab market, there are pepper plantations and there’s a beach island with cabanas and no electricity. That’s about it. It was popular in the 50’s but no one goes there anymore.”

We ended up spending nine nights in the area. There was nobody there, there was nothing to do and it was wonderful. Okay, that’s an exaggeration. There were people there (mostly French and Cambodian) and there was stuff to do (eating crab and eating more crab). The French gentleman who owned the first place we stayed told us it was the “high season” but I’ve never seen a high season with so few people. There seemed to be more tuk-tuk drivers than tourists and that was A-OK with me.

So, how do you spend nine days doing nothing in Kep?

Kep is the crab capital of Cambodia. There is a seaside wholesale market where dozens of Cambodian women sell crab, shrimp, squid, fish and other seafood. Adjacent to that is a row of crab restaurants serving up a variety of rice and noodle dishes, but with crab as the main event. Prices vary but most of them offer crab dishes that feature 3-4 good sized blue crabs in the US$5-7 range. Our favorite was So Kheang: Cheap, delicious crab, and friendly staff. We went there three days in a row. Wood slat floors, wood tables, and an open view of the sea. Steamed crab served with a dipping sauce of salt, black pepper and lime juice seems to be the local favorite. The other preparation is crab stir fried in a sauce made from fresh green peppercorns. It is three times messier than just easting steamed crabs but the flavors are fantastic.

For a cheaper and more entertaining experience, you can go directly to the women selling crab in the market. Slap a smile on your face and get ready to haggle. Get down and dirty and examine the crabs like the locals do and pick out the ones you want while you agree on a price. We were able to get a kilo for US$5 (That’s about $2.25 per pound). You then take your bag of crab over to the ladies minding the steamers who will steam it up for 75 cents. Grab some rice, hot sauce and a couple of Angkor beers and you have an enormous crab feast for two for around US$10.

You can tell that more upscale places are starting to go in to coincide with the growing number of foreign tourists visiting the area. No crab shack should have the word “lounge” in its name. Their prices are way too high compared to their bare bones neighbors. When the cheaper joints are pulling their crabs straight out of the water when you order and then cooking them to perfection where exactly is the incentive to pay three times as much for nicer decorations?

Kep is a bit lacking in the beach department. There is one in town that has sand that’s been shipped in from Sihanoukville. It isn’t bad but if you really want to hit the beach your best option is to head to Rabbit Island. Round trip boat tickets from the Kep pier will cost you US$12. Most visitors go out for the day to play in the water, do some snorkeling, lounge in a beach chair or hammock, grab a snack at one of the beach hut restaurants, and then they head back to the mainland. If you want, you can stay there but accommodations are a bit rustic.

The island presently has no infrastructure. All supplies come in by boat. All electricity is provided by generators and those only run from 6-11pm. You can get a beach hut with a comfortable enough bed, mosquito net, cold shower & a squat toilet for US$10. Nicer ones are available for more. Food and drinks are relatively cheap and most of the places have happy hour discounts. It is a great place to spend the day in a hammock. Even when all of the day trippers are there it never feels crowded, and it really chills out after they head back to the mainland. Hiking around the island we saw a couple of earth movers clearing some land. Not sure what it is for but it is only a matter of time before resorts start going in. Enjoy it while you can.

North of the crab market there are several expensive resorts with high walls and massive gates that make them look more like compounds than vacation spots. Julie found a nice place south of the market called MeaLea that was a little expensive for our budget (US$45 a night) but was well worth the benefits: Big, comfortable bed; right down the street from the crab market; great internet so I could watch the Colts mess the bed in Foxboro; a nice pool with a view of the sea (no walls or fences to obstruct the view); a very friendly staff; and probably the best “free” breakfast I’ve ever had at a hotel. Every morning I got two perfectly fried eggs, bacon, a whole toasted baguette with butter and jam, a plate of fresh fruit, fresh orange juice and Vietnamese coffee.

After our trip to Rabbit Island we got back into our budget window and stayed at Kepmandou Guesthouse. It’s pretty much a hostel that looks more like a treehouse than a building. The bar on the second floor is a nice place to relax and offers some nice views of sunset as well as plenty of drink options. They also crank out some great food at reasonable prices.

The cheapest way to go is by renting a scooter and driving yourself around. We decided to spend a little more money and hire a tuk-tuk for the day to visit a peppercorn farm, some caves and to see the salt fields. I wanted to be able to enjoy the scenery instead of worrying about getting run over by a cargo truck. The only downside to renting a tuk-tuk is that you are immediately marked as a Westerner and you will be greeted by hordes of children at every tourist stop you make. Sometimes they want to be your tour guide for a couple of bucks, sometimes they are just looking for a handout. They all know English. By the time they’re seven or eight most Cambodian children can have a basic conversation with you. By the time they’re twelve they could probably talk you into buying a used car.

I’m hesitant to say that anything good came out of colonialism, but having visited a few former French possessions it is hard to view the spread of French culinary traditions as a bad thing. You can usually find great bread, great pastries and ex-pat restaurants turning out some solid French bistro food. This is the case in Kep. Baguettes and croissants. Savory crepes and croque monsieurs. The savory crepes at Koki are monstrous. I recommend the one stuffed with bacon, caramelized onions and some good stinky cheese. The croque monsieur at Kepmandou is one of the best sandwiches I’ve had on the trip. It was better than the croque monseuir I had in Paris and half the price. For those not familiar, it is a grilled ham & cheese sandwich with nice cured ham and extra cheese melted on top. Kepmandou tops theirs with a fried egg which technically makes it a croque madame but who I am to argue. It is a good thing we only stayed there two nights because I ate one each day and that pattern would have continued had we stayed there longer.

I think peak season differs for local visitors and foreign visitors. There weren’t many Cambodians vacationing in Kep when we were there because it was “winter”. The hotter summer months are more popular locally while Europeans wanting to escape the cold visit during the December through March window. It really is a great time to visit: Warm enough to swim and very little rain. Kep’s popularity will only continue to grow and rightfully so. Fortunately, development doesn’t exactly move at a lightning pace in Cambodia. The roads are there. Resorts and guest houses continue to be built but there is a lot of space to fill in.

← And Then There Was Harlaxton: 20 Years Since My First Big Trip
Budapest: Fried Dough, Fireworks and a Friend Comes to Visit →

6 Responses to A Case for Kep: Cambodia’s Other Beach Town