Autumn in Istanbul can be a little hit or miss. One day it is sunny and cool with a crisp fall breeze, the next is cloudy and damp with a cold drizzle. The weather can dictate your plans, but it doesn’t matter because no matter where you end up it will probably involve something delicious. This post is by no means a comprehensive list, just the things we enjoyed during our ten days in Istanbul.

The humble fish sandwich is the crown jewel of Istanbul street food in my opinion. Two dollars gets you grilled white fish on a toasted baguette-like roll topped with a salad of fresh onions and tomatoes mixed with fresh herbs and spices. Sometimes they are finished with grilled hot peppers and a pomegranate sauce. There are vendors along both banks of the Golden Horn on either side of the Galata Bridge. Our favorite was near the fish market. 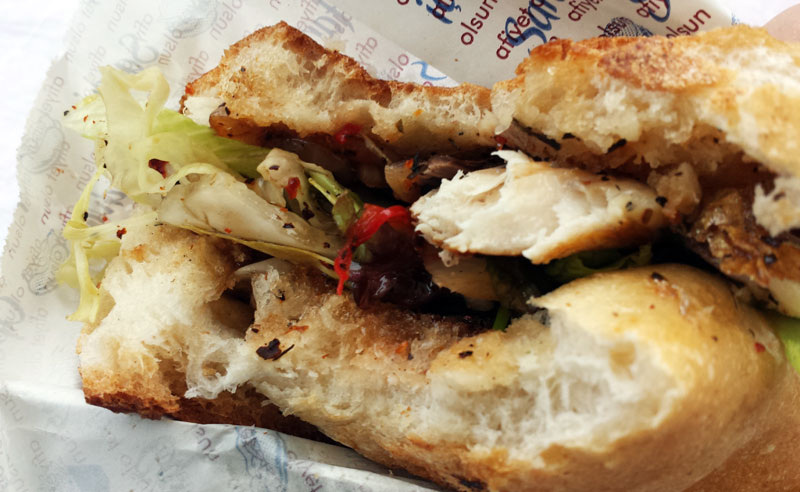 You’ll find small vendors everywhere selling a variety of items from grilled corn, roasted chestnuts, stuffed mussels, breads, pastries and more. One of our favorites was Simit, which is similar to a bagel. You can get them plain or with a cheese spread.

Watch the stands near popular tourist attractions. Prices sometimes aren’t listed and can go up if you don’t ask first. Find a place away from the crowds for better quality and a better price.

There’s more to Istanbul pastries than baklava though most seem to involve similar ingredients such as phyllo dough, nuts and ridiculous amounts of honey.

Karaköy Güllüoğlu is probably the most well-known, but you’ll find bakeries all over Istanbul serving up these desserts. Enjoy some with a Turkish coffee or tea for a big sugar/caffeine buzz.

I was not aware of this desert until I was introduced to it in Istanbul. Now I look for it. I will order it anytime I see it on a menu in the hopes that it is, at least, a fraction as good as what we had in Istanbul. A sweet cheese pastry soaked in sugar and topped with pistachios served warm.

When Americans think Turkish food the first thought is usually of döner kebabs carved off a massive spit. Kebab shops are everywhere. Kebabs seemed to be a bit simpler in Istanbul. They didn’t drag it through the garden and load it up with toppings. In Budapest, the Turkish kebab places were a bit more familiar with lettuce and tomato. In Istanbul the basic version was usually meat and pickled veggies wrapped up dürüm style. Still great for a grab and go snack, but there were so many things we liked better. Here’s a reference for knowing all the different styles of Turkish kebabs

If you have time to sit, skip the sandwich and grab the meal. We fell in love with a place right around the corner from our apartment. The food was so good and the prices so low that we went back several times. The first time we walked into Tophane Dürümcüsü we seemed to be a bit of a curiosity. The second time we went the staff seemed to be confused as to whether we were the same couple from the day before. On the third trip there was recognition, smiles, and laughter. If I had that place around the corner from my house, I’d be on a first name basis with everyone who worked there.

On our first trip, we tried the Adana kebab which is a spicy ground lamb mixture pressed onto large sword-like skewers and grilled. As we worked our way through the menu with each return visit, we hit upon our favorite: chicken wings. For four dollars you get a half dozen spicy chicken wings grilled to order; grilled tomatoes and hot peppers; rice; a spicy side salad of lettuce, tomatoes, and herbs; and a stack of grilled flatbread. Four dollars! It’s difficult to get out of McDonalds for less than four dollars.

If the sugar from all of that baklava isn’t enough, there are confection shops everywhere that crank out these sweet little cubes. Essentially made from sugar and starch these soft, gel-like treats come in a slew of flavors. Most of the larger shops usually have plates of free samples so you can always grab a few to taste as you wander Istanbul.

Not really a favorite but unique, the ice cream in Istanbul is interesting for lack of a better word. Its consistency is closer to taffy with vendors literally having to pull it to get it onto a cone.

Manti is a gnocchi-like dumpling that is typically served with a yogurt sauce. Nice comfort food for a cold, rainy fall evening in Istanbul.

For the indecisive, cafeterias are a good way to go. They serve up a variety of traditional Turkish foods so you can sample a lot of things easily. I just started grabbing things off the shelves and pointing to dishes on the counter. I never looked at the prices or asked any questions; we just piled stuff on our tray.

We took our bounty to a booth, unloaded the tray, and dug in. We cleaned up every plate. They give you plenty of free bread to mop up the plates which is nice. I wish we had done this more than once.

Ahh, Kumpir. Kumpir is a massive baked potato, scraped of its innards which are then mixed with butter and shredded cheese, put back in the skin, and topped with items that seemed like they were selected by a stoned American college student who was only allowed to use what he could find in his fridge: hot dog slices, pickles, black and green olives, corn, peas, more cheese, pickled beets, yogurt, mayo, ketchup and various selections. It is way better than it sounds.

You’ll find multiple stands at the popular Nargile strip in Tophane and out by the Ortaköy Mosque. A popular place for families to visit on weekends, the area around the Ortaköy Mosque is full of restaurants and food stands.

Seafood is everywhere from the little mussel stands to restaurants well beyond our budget. We wanted to expand a bit beyond the fish sandwiches so we started getting plates of sardines with our meals. Sometimes grilled sometimes fried, but always delicious.

Known for its potency Turkish coffee is good for a pick me up. Brewed without a filter the bottom of your cup usually looks like a gritty 10W-40. At nice spots it will come with a delight or two. I drank more tea than coffee, though.

In the states tea is seen as coffee’s runty little brother. Have three glasses of Turkish tea one evening and let me know what time you get to bed. It is brewed everywhere from top end restaurants to cafes, to little sidewalk stalls, to individuals serving it on the street from carts. You can always find a hot glass of tea and a little plastic stool with your name on it.

Our favorite was the guy who operated down the seawall from the ferry port. Served from a small table for a dollar a glass, and served on little plastic stools right on the water.

Don’t send that caffeine off to battle sleep alone. You might as well send in his friend nicotine to help. I don’t care if you’ve never smoked a cigarette in your life. Spending any amount of time in Istanbul will have you considering reasons why it is important for you to smoke tobacco. “It’s an essential part of Turkish culture. This is an important cultural experience. I’m doing this for science,” or something along those lines.

Nargile, more popularly known in most of the world as hookah, is essentially a massive glass water pipe for smoking a solid form of tobacco or whatnot. In Turkey, in public, it is just tobacco on the menu. Three or four glasses of tea and a couple of hours on a nargile, and you’re going to be up for a while.

← Thailand and My Search for a Three Dollar Haircut
The Best Job Interview Question I’ve Ever Been Asked: A Tribute to a Friend →

One Response to The Flavors of Istanbul: There’s More Than Just Kebabs