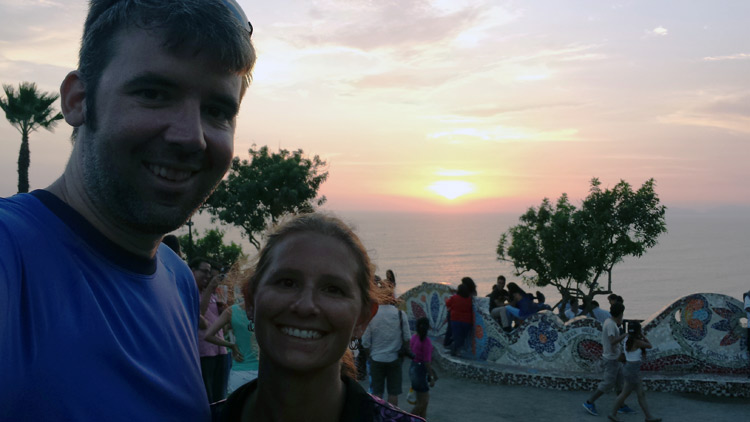 We enjoy a proper pub crawl as much as the average Edgar Wright movie character but alcohol is expensive and if we’re going to do a pub crawl we’ll save it for when we visit a country with a pub culture.

One of our favorite ways to save money when traveling is to self-cater and hit various parks in the city where we’re staying. Lima has a lot of great parks and is a great place to spend the day hopping from one to another.

We stayed in Miraflores which seems to be the main area for tourists to stay in Lima and with its many parks is a great place to start. There are plenty of bodegas and stores to stock up on snacks and beverages. The top of the food chain so to speak seems to be Wong’s. Primarily a grocery store the bigger ones also carry electronics and housewares. This place was nicer than most grocery stores I visit in the States. The one in Miraflores has a massive full service deli where you can get anything from sandwiches to ceviche and all at very reasonable prices. So, when you’re ready to start your day, grab some food and head to the Malecón.

A series of very well maintained parks stretches for miles along the top of massive cliffs that look out over the Pacific. You can spend all day wandering from one to the next or find some shade under a palm tree to enjoy the breeze. Have a snack and a nap. Grab some ice cream from one of the many vendors who peddle their ice cream chest equipped tricycles down the Malecón as you go from park to park. Grab a seat at the skate park and watch the youth of Lima throw caution to the wind as they try to perfect their skateboard tricks. At the end of the afternoon there are plenty of places to enjoy the sunset.

But wait, your day isn’t over.  Grab a taxi and head to Kennedy Park in the heart of Miraflores. Taxis in Lima are very cheap and very plentiful. The fare is always open to negotiation. Always ask how much before you get in the cab, and if you feel like haggling have at it. If he doesn’t go for it there will be another one along before you finish your negotiation. Depending on where you are on the Malecón a taxi to Kennedy Park should only set you back somewhere between S/.3-6  (Nuevo Soles – about US$1-2.25).

There is an artisan market in the park many evenings if you are into shopping but we went there for dinner. There is a sandwich cart there that serves up pork, turkey and other meat based sandwiches on a nice crusty bread roll with onions, hot peppers and slathered in your choice of sauces the best of which is ají, a spicy sauce made from hot peppers. You can wash it down with a cup of chicha morada (a centuries old drink made from Andean purple corn, pineapple & spices) for S/.10 (about US$3.50). There’s also a sandwich stand in the adjacent Central Park, but we felt the one in Kennedy Park turned out better sandwiches.

If you’re a fan of fried dough, hit a picarones stand for desert.  They may look like onion rings but these loops of deep fried dough drizzled with syrup are a sweet way to finish off a meal. At S/.4.50 (US$1.60) per portion (five rings) you may find yourself going back for seconds. Or thirds. Tip: Bees love the syrup. If you get picarones during the day be careful as you may find more on your plate than just fried dough and syrup. While enjoying those picarones, check out the very small amphitheater in Central Park. During the day there are sometimes organized performances (we saw an international folk dance exposition one day) and in the evening there seems to be a group of musicians that regularly get together to play to whomever cares to sit down and listen. There are also a countless number of cats that call Kennedy and Central Parks home. They aren’t strays per say, they are fed and cared for by Miraflores. If you happen to see a stray dog wander into the park, just sit back and wait for the hijinks. The dog usually thinks it has found heaven. The dog is usually wrong.

So it is dark and you’re done with dinner….that’s it for the night, right? Wrong. From the point of Central Park head across the traffic circle to Avenida Arequipa and hop on a combi to downtown Lima. Combis are minibuses that are operated by numerous companies and run all over the city. Don’t worry about route numbers or schedules, such structured ideas are completely unnecessary and practically incomprehensible. The combis have the areas they service painted on the sides of the bus and if you every have any doubt, just ask the conductors who hang out the side door trying to recruit passengers by barking out where they’re headed. The ones labeled either “Tacna”, “Wilson” or “Todos Arequipa” run the length of Avenida Arequipa and will get you where you are going: Parque de la Reserva. The best part is that it usually only costs S/.1 or maybe a bit more for the ride.

The Parque de la Reserva is home to the largest fountain complex in the world. At least that’s what Wikipedia says. So, take that Bellagio. Admission will set you back S/.4 (US$1.50). They have a fountain/laser light show that runs several times a night. They have fountains to admire and fountains to play in. Be careful what you wear, you can get wet even if you aren’t trying. While it is predominately a destination for families and teenagers it is still very entertaining if you don’t have kids or are no longer one yourself. If you are still hungry there are some food stands in the park, but the better selection is outside the park. Several permanent vendors occupy Madre de Dios, the street that runs on the north side of the park where the main entrance is located. There are also vendors outside most of the exits offering sandwiches, anticuchos (kebabs), ice cream, and other street food.

If you stay until close, the combis may be finished running for the night depending on the day of the week. No matter. The city buses still run. The same rules apply. If you’re headed back to Miraflores just look for one with that on the side of the bus and when in doubt, ask the conductor. Buses head back to Miraflores by both Avenida Arequipa and Avenida Arenales. The cost is in the S/.1-2 range.

If you get back to Miraflores and aren’t ready for bed (Lima is a late night town after all), you may find that Central and Kennedy parks are closed. That’s okay, the Malecón never closes and Miraflores is very safe so feel free to join all of the couples in Parque del Amor or any of the other parks along the Malecón. When you finally decide to turn in you will be able to sleep easy knowing you had a fun filled day and spent less than US$20 per person doing it.

← Costa Rica Wrap Up & Guide
The Sacred Valley of the Incas →

5 Responses to Lima Park Crawl: A Budget Way to Enjoy a Day in Lima, Peru