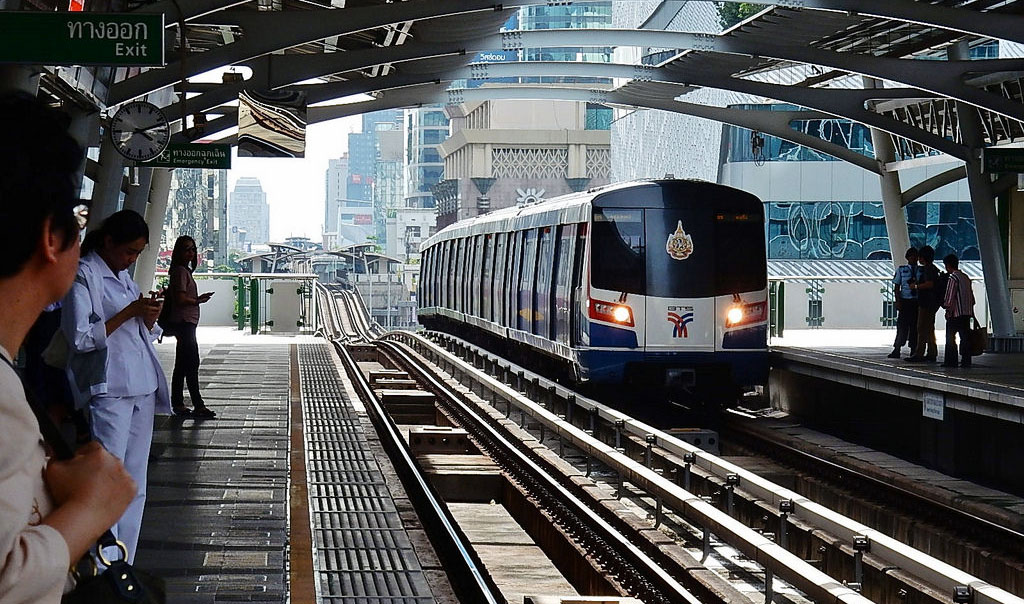 When you travel long term, things you regularly do at home, but seldom do on vacation, can become minor adventures. I’ve never sought out a haircut on vacation. I don’t like getting my haircut at home. I follow a pretty steady pattern when it comes to getting a haircut. It’s a three-month cycle. I get my hair cut short and just let it grow. When I start to look too much like Noel Gallagher, I get it cut short again. Over the course of our trip, I had my hair cut in Portugal, Croatia, Thailand, Indonesia, and Tennessee. And while the lovely woman in Pula, Croatia gave me arguably the best haircut of my life, the best story comes from Thailand.

When we first arrived in Bangkok, we used the Skytrain to explore the city. The Skytrain is the elevated train system that connects a good amount of Bangkok. The large, open air stations have shops for everything from juice bars to sports gear. One station had a barber shop featuring haircuts for 100 Baht (Just over US$3). I was getting a bit shaggy, and Bangkok is the hottest, most humid city in the world, so I was all for it. Unfortunately, both ladies working were already with customers. And since I abhor waiting I told Julie that I’d just try it another day.

We never made it back to that station as I’d never go specifically for the haircut. It had to be in passing. If I specifically went there, and they were busy, I still wouldn’t wait, and I would have wasted a trip. Our time in Bangkok came to an end, and we sat off to explore other parts of Thailand. Being a stubborn pain in the ass, I was on a mission to find another 100 Baht barber. Anytime we passed a barber shop or salon I would check for signs or ask how much. But I couldn’t find one for 100. When we were in Ko Lanta, we passed a place for 150. I told Julie, “I may go back there tomorrow. 150 isn’t bad.”

I never went back.

We spent the ten days leading up to Christmas in a large studio apartment in Chiang Mai. One day after losing track of time while working through the morning, we headed out for a late lunch. As we were walking down the street toward the restaurant we had picked for lunch, we passed a barber shop with a sign for 100 Baht haircuts. We were both hungry as it was well after lunch time. But since it usually only takes 15 to 20 minutes to cut my hair, we figured it was better to knock it out.

We walked in to double check the price and see if there was a line. There was a woman at the cash register counter and one barber standing next to her, waiting for a customer. I bowed my hello and asked about the 100 Baht haircut. The woman said yes and directed me to the man next to her. He smiled and waved me over to his chair.

The barber was easily in his seventies. Bald and bespectacled he was barely five feet tall. When I sat down in the barber chair, I realized that I was still taller than he was so I slid down a bit to make his job easier. He spoke no English. He stood behind me, and we looked at each other in the mirror. I put my hand on the base of my neck and ran it up to the top of my head to indicate I wanted that clipped short, and then I pinched a chunk of hair on the top of my head to indicate how much to be taken off the top. He nodded what I assumed was acknowledgment.

It’s at this point the barber or hairdresser normally reaches for their clippers, goes all boot camp on the sides, and piles of black and gray hair fall in large clumps into my lap. My barber shuffled over to his mirrored counter, slid open a drawer, grabbed a long pair of scissors and a comb, and shuffled back behind me. He began over my left shoulder, running the comb up through my hair and flitting the scissors lightly through. Again and again. After several minutes, he had worked his way to the back of my head.

Confused thoughts started running through my head. “What is he doing? Why clean up my hair if you’re just going to cut it all off?” It didn’t make any sense. I chalked it up to miscommunication. I couldn’t clarify it with him. I decided that if he didn’t cut my hair as short as I would like who cares? It’s three dollars. I can always get my hair cut again somewhere else. So I just sat back and let him do his job.

He kept working, moving ever so slightly as he went along. Comb up through my hair. Snip. Snip. Snip. Comb up through my hair. Snip. Snip. Snip. The woman from the cash register counter appeared with a tray of tea in clear glass tea cups. I didn’t realize what it was or that it was for me, so it sat on the counter the whole time. They gave Julie tea as well. She was sitting on a bench flipping through magazines. Enjoying the pictures and reading what articles were written in English. As time passed, she started to wonder what was taking so long. She couldn’t see the progress because each barber had a curtain around his chair area. There was no way to communicate, so she was left to wonder.

More time passed and the barber continued to work. Snip. Snip. Snip. I began to notice that my hair was getting shorter and shorter. Closer to what I wanted. He did pass after pass, working through my hair.

“He isn’t doing this whole thing with scissors is he? There’s no way. That’s insane. How does he not own clippers?”

“Holy crap! He is doing this whole thing by hand.”

There were no large chunks of hair in my lap or on the floor. He had whittled my hair all the way down to what I wanted. It looked perfect. After an indeterminate amount of time – my phone was jammed in my front pocket, so I couldn’t check – he finished up. He began shooing the loose hair away and cleaning up. He looked at me in the mirror with a puzzled expression on his face. Something wasn’t quite right. He shuffled over to the counter, slid open the drawer, and pulled out his electric clippers. He shuffled back to me, turned on the clippers and with a graceful touch, squared up the bottom edge of my sideburns. He turned off the clippers, shuffled back to the drawer and put them away. He finished dusting me off, pulled the cape away and directed me back to the register kiosk.

Dumbfounded, I was too busy grinning at myself in the mirror to move right away. I eventually got up and made my way to the register. Still grinning like an idiot, I gave him 200 Baht, bowed, and thanked him. I collected Julie and we headed out to the street. Once we were out of the building, Julie looked at me and asked, “What happened in there? Why did it take so long?”

“Why? Was it that bad? How long were we in there?”

“We were in there for over an hour.”

I explained everything that happened as we continued to what had become an afternoon snack slash early dinner.

I guess there’s something to be said for taking pride in your work and doing things the right way. He could make more money if he was more efficient. Then again, who am I to argue with a professional? Regardless, if I end up back in Chiang Mai I know where I’m going for a haircut.

← Our Nineteen Hour Bus Ride in Vietnam the Week Before Tet
The Flavors of Istanbul: There’s More Than Just Kebabs →