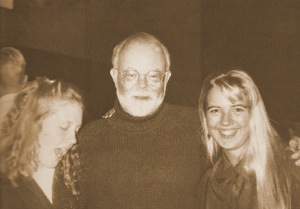 Mr. David Soots was my English teacher my senior year of high school. But the class was more than that. It focused not just on literature but also art history and architecture. It was one third of the afternoon honors classes at Chatard High School (They call it Bishop Chatard High School now, but I attended before they got all uppity.) that also included an intro to philosophy, world religions (Hinduism, Buddhism, Taoism, Islam, etc.), government & economics.

a chord. I didn’t necessarily excel in his class. I rarely did my homework. I never took notes because back in my days before alcohol and other things my memory was at the top of its game and I could cram enough facts into my head in a short period of time to do well enough on the tests.

While his lessons on Renaissance art and architecture delivered with his dry wit opened my eyes to a whole new level of interest in history and far off places, it was what he said one afternoon that stuck with me the most. I can’t possibly provide a direct quote but it came down to this: You won’t be able to afford to do everything you want to do. At some point you’ll have to make a choice about what is important to you. Travel is what is important to me. I live in an apartment and I drive an old car, but I spend two months each summer in Europe. I could have a nice house and a new car, but not at the cost of sacrificing travel.

What are you willing to pay to get what you want? In Economics it is referred to as a tradeoff (later taught to me by co-worker and part-time Econ teacher Tom Kapostasy) and it is an exercise I use when evaluating major decisions in my life. When it comes down to decision time and you have to pick, which one are you going to choose? I have been trying to find a way to integrate more travel into my life and I finally reached the point where I had to choose. Steady employment with three weeks of vacation a year or “Oh shit, how am I going to make money?” and fifty-two weeks.

Mr. Soots passed away a couple years ago while traveling. I never had a chance to thank him. I saw him sitting in a restaurant downtown a few years ago and thought about stopping to say “hi” but decided I didn’t want to interrupt. Most of my conversations with long lost acquaintances are usually horribly awkward as I’m awful at wrapping up a quick “Hey, how ya doin?” so I tend to err on the side of caution and just avoid them altogether. That and I hate interrupting people when they’re eating. I’m sure he heard plenty of thanks over his tenure anyway as is evidenced by his memorial page (the source of the photo in this article). Regardless, thank you Mr. Soots for planting that seed in my brain over twenty years ago. I’m sure I’ll raise a glass to you many times over the next year.

← Book It! We have flights so it is official now.
Our First Interview →

One Response to A Thank You to a Teacher