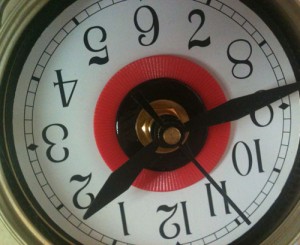 I may not be the king of procrastination, but I’m in the royal family. Focusing and addressing the tasks at hand have always been a problem for me.

When I was in fourth grade the punishments for misbehavior were writing assignments. Nothing creative, no essays, just straight copying. The first level was the “Page 8”. Mrs. Christenberry made us copy the 8th page of our social studies book. It was nothing more than a list of geographic terms. I earned that assignment a lot. Enough that I still remember many of the details. The first word on the list was basin, the last word was volcano, and the half-way point was mountain.

There couldn’t have been more than 30 definitions. If I were to sit down and do it right now, I could probably knock it out in 15 minutes. Then, it took me what seemed to be 2 hours or more. I would sit at our kitchen table and do anything but what needed to be done. The pisser is it didn’t even require any thought. It wasn’t creative, it was just copying words that were right there in front of me and I would just sit there. I would day dream about things I could be doing if I didn’t have to write. I’d make mazes out of the patterns in the wallpaper. I’d test taste everything in the spice cabinet. Incidentally, I never reflected on my behavior nor thought about modifying it much to prevent getting further assignments. That didn’t kick in until I started to serve detention in the ensuing years. At least you got to go home with a writing assignment. Having to stay at school even longer was potent motivation to shut up.

In college the first time I had to write a legitimate paper I vowed to turn over a new leaf. I wouldn’t wait until the last minute. I was going to take this seriously and work on it ahead of time. I got a C. That new method lasted that one paper.  Sure, I’d think about ideas ahead of time. Put thoughts together in my head. But I wouldn’t start writing until the night before. If I hit a road block or my brain stopped working, I would go to bed and just get up early and finish it in the morning. An hour a page was the formula. If I needed five more pages and class was at 11am, I would be up and writing at six. Part of it is the thrill of seeing if you can get things done in a short, pressured timeframe. You tend to be more creative when you have no choice but to be creative. It doesn’t always pay off but it sure isn’t dull. The other part is hard wired. I can see everything I need to do mapped out in a nice little timeline in my head but for some reason it takes a herculean effort to take the tiniest of first steps.

The problem with this trip is that it is very unnatural for me to plan this far out. I’ve had some lapses for sure and I know I’ll have more. But this is the first time the stakes are high enough for me to stay focused. Well, more focused than usual. I know I need to write more. I’ve written some things but they still need to be edited. Instead of doing it I just stare blankly at my screen, surf the web, get distracted. It’s like grade school all over again. I know what I want to write about. I’ve gone over it in my head. I’ve dictated notes. Hell, I started this post a couple weeks ago and have gone back to it several times in an attempt to wrap it up.  Trying to build up this blog, work on another side project, and keep up on my employer’s work while also planning for the trip itself can be a daunting task and one that I’m not always up for. Here are some things I do to try and push through:

I try to follow these as much as I can but I’m not always successful. If you have any tips feel free to share them.

← For friends planning a vacation around their trip to Le Mans.
Roots of the Travel Bug #1 →

4 Responses to Getting Over the Procrastination Hump